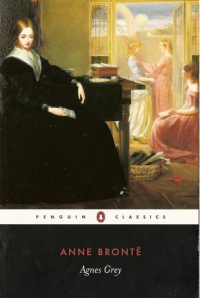 Last year I read all the Jane Austen novels I hadn’t read yet. This year I wanted to do the same with the Brontë novels. Agnes Grey was one of those I hadn’t read yet. Unfortunately starting my project with this book wasn’t a good choice. I found it so dark, I don’t think I’ll pick up The Tenant of Wildfell Hall any day soon, nor Villette or Shirley. Don’t get me wrong, I did expect a bleak story as I knew the book was based on Anne Brontës experience as a governess; an experience that was so negative that it led to her writing of Agnes Grey, hoping it would raise awareness and maybe help change a few things for future governesses. The description of the loneliness and social isolation of a governess were bound to be depressing but what really got to me are the many instances of cruelty against animals. I didn’t see that coming and really struggled through this novel. All the negative characters in this book—children and grownups alike— share a common trait— they see themselves as superior. If they think they are superior to other human beings, how much more must they feel superior to animals? Descriptions of torturing birds, hitting and kicking cats and dogs abound, and turned reading this novel into a nightmare. There’s even an instance in which Agnes, who loves animals, crushes a bird’s nest, to save the small birds from being tortured. Awful!

The book begins with the description of Agnes Grey’s childhood. Unlike most other Brontë heroines, she has a happy childhood and loving parents. They are not very rich but live comfortably until the day when her father loses everything due to an unfortunate investment. There is no urgent need for the two Grey girls to work, but Agnes would like to help her parents financially and decides to become a governess. Thanks to a reference from an acquaintance, she soon finds employment, although she’s only 19 years old and doesn’t have a lot of qualifications.

Her first employment is with the Bloomfields. Agnes knows it will be hard to live far away from her family and that she won’t be able to see them more than once a year. She is sure that her time away will not be easy but she didn’t expect she would be so miserable. Not only is she treated like a servant, but the children of the family are monstrous. They kick and scream and rebel. They are so badly behaved, only a very strong hand would be able to tame them. At the same time they are spoilt and Agnes isn’t even allowed to raise her voice, let alone punish them. She is shocked. She didn’t even knew that children could be like this. One boy in particular is very nasty and enjoys torturing small animals.

After a year she leaves the Bloomfield family and finds new employment with the Murrays. The children are slightly better behaved. There are four of them, two boys and two girls. Luckily the boys are sent away and Agnes does only have to teach the two girls. They are not interested in learning anything and treat Agnes just like their parents: condescending and as if she was a slave. One of the girls is a nasty piece of work. She’s very beautiful and uses her looks to manipulate and flirt. It’s her biggest joy to refuse and humiliate the men who fall in love with her. When she becomes aware that Agnes is interested in the curate Mr Weston, she tries to seduce him as well.

I can understand that people at the time were shocked when they read the book. I wasn’t shocked about Agnes’ treatment, because I knew that governesses had a hard life, due to their awkward situation. They come from the same class as their employers but they have no money and are forced to work. Because they have to work they are seen as inferior, at the same time they are not accepted by the servants because their social class and education places them above. It’s hard to imagine how lonely and helpless these women must have felt.

What shocked me as a modern reader is not so much that they didn’t accept Agnes as one of their own, but how mean and nasty those children were. How spoilt and misbehaved. They were as cruel and mean to Agnes as they were to their animals. They made her suffer on purpose, played tricks on her, disobeyed constantly, had no interest in anything.

If this was what poor Anne Brontë had to endure it’s quite appalling. I don’t know why any parents would have put up with such behaviour. These children have not the tiniest feeling for good and bad, no morals at all. They know what’s socially acceptable, and act accordingly, but only as long as it brings them some benefit or other.

What I found  most disturbing are the scenes among the destitute and the poor. Many rich girls and women did (and still do) charity work. The Murray girls are no exception. They visit the poor, bring things and money but they are never good or kind. They have been taught to give but they do so condescendingly, while Agnes spends time with them, reads for them or just sits and chats with them.

The end felt a bit like wish fulfilment. In a way you could say that the good are rewarded and the bad are punished.

I can see why Agnes Grey isn’t as famous as Wuthering Heights or Jane Eyre. Nor why it is not as well-known as Villette and The Tenant of Wildfell Hall. I found it interesting but dry and shocking. It’s not very descriptive and the character’s voice lacked life. I suspect, should I go on with my Brontë project, that this will remain my least favourite of their novels.

Have you read Agnes Grey? What did you think of it?