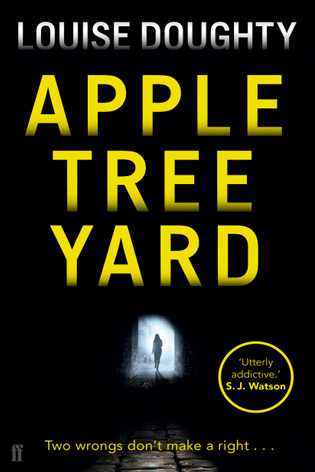 I wanted to read Apple Tree Yard as soon as it was out last year because I’d enjoyed Louise Doughty’s earlier novel Whatever You Love so much. I didn’t really know what to expect, didn’t read any reviews, and so I was glad to find out that not only is the book very different from her earlier novel, but just as good, maybe even better.

Apple Tree Yard tells the story of an affair that goes terribly wrong. Yvonne Carmichael is in her fifties, married with two grown-up kids. She’s a scientist and very successful in her work. Her marriage could be better but yshe and her husband do get along fine. What it is that makes her follow a man and start an affair with him? Boredom? Love—or rather lust— at first sight? Maybe a bit of both.

The book opens with a prologue that gives away a lot. We know Yvonne Carmichael and her lover have been arrested and are being tried and we also know that the prosecution has found out something that could be fatal for Yvonne. I think it’s quite impressive that Louise Doughty managed to give away this much in the prologue and still was able to write a page-turner that held my interest until the last page.

What worked particularly well for me was that large parts of the story were written as if Yvonne was talking to her lover, which was intimate and eerie at the same time.

Apple Tree Yard is the third crime novel with a London setting that I’ve read this year and, once again, the setting is almost a character.

The book is a crime novel but it explores a lot of themes in a very arresting way. Unfortunately mentioning some of them would really spoil the book. One theme I can mention, which is important, is the exploration of a marriage. Yvonne and her husband still share a lot but they are clearly not in love.

Apple Tree Yard is part thriller, part court-room drama, nicely paced, intricately plotted and infused with a bitter-sweet, melancholy mood that is quite rare in crime novels. A very gripping and intense novel.