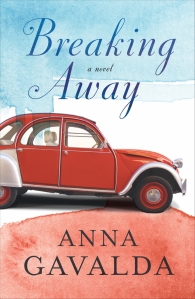 When you look for something light but still profound, Anna Gavalda is an ideal choice. Her writing is airy but not fluffy. Her characters struggle but they make it eventually. Her slim novel, L’échappée belle, which has been published under two different names in English— Breaking Away and French Leave— was just like that. Entertaining, yet thoughtful. Amusing but a bit sad as well. The only problem I had was the structure. Breaking Away is divided in two parts. In both parts the book is told from Garance’s point of view but in the first part she’s the first person narrator, while the story is told in the third person in the later chapters. I wasn’t entirely sure why Anna Gavalda chose this approach. It gave the book a disjointed feel.

Garance, her older sister, Lola, her older brother, Simon, and her sister-in-law, Carine are on the way to a marriage. The scenes in the car are priceless. Carine is quite stuck up and the two sisters tease her mercilessly. They make her feel excluded, shock her, and push all of her buttons. Especially Garance, whose life style is wild and disorganized, antagonizes her constantly.

When they arrive at their destination the three siblings realize they are not in the mood for marriage malarkey, for family and hypocrisy. They would rather spend a day on their own and decide to pay a visit to their younger brother, Vincent, who is working as a guide at a Château.

Once there, they spend a wonderful time together. The siblings are very close and you get the feeling that whoever joins them, will always stay outside. This cannot be easy for a spouse or a girlfriend/boyfriend.

The siblings all seem at a turning point— newly divorced, just starting or ending a relationship. Garance is the one who will undergo the biggest change adn she has a new friend: a dog she adopted on the road trip. While the first part is like a road movie, the second shows us Garance on her own, in Paris.

Although the book is flawed and I didn’t understand the author’s choice to change from 1st to 3rd person, I did enjoy this. I have no siblings, so I always idealize the relationships between brothers and sister, even though most siblings I’ve met in real life never had such an intense, harmonious relationship.

A lot of Breaking Away is written in spoken language, using different types of accents and vernacular. I wonder how the translator handled this. It can’t  have been easy. In my opinion this gives the book added meaning, more depth. There’s a North African shop owner, for example, who speaks with a very strong accent. Reading it, I could hear it and was at first a bit shocked because it seemed racist but then we find out that Rachid speaks a perfect, accent free French, and only uses this accent to make fun of people who expect every North African to talk like this.

I’m glad that I still own another book by Anna Gavalda which I haven’t read yet – Hunting and Gathering – Ensemble c’est tout. It has been made into a movie and so has Someone I Loved. Her books make excellent choices for movies as her writing is heavy on dialogue.

For another take on the book, here’s Guy’s (His Futile Preoccupations) review.