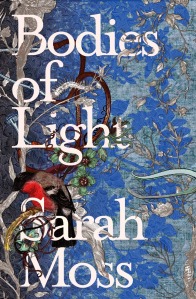 In January I read Sarah Moss’ first novel Cold Earth (here is the review). I liked it but had some minor reservations. I wasn’t sure how good a writer she really was. After having read her latest book, Bodies of Light, I think it’s safe to say that she’s evolved from a promising writer to an accomplished one.

I didn’t look at the author’s name when I saw the book at the book shop the other day. What caught my attention was the beautiful cover that reminded me of a Victorian wallpaper. As soon as I opened it, I discovered that they had used the same endpaper inside. When I read the blurb, I saw how fitting this was, as Sarah Moss has set her third novel in Victorian Manchester and London. This might not have been enough for me to buy the book, but I started browsing and what struck me was how often colors and light were mentioned. I did something I don’t do that often; I bought the book and started reading it right away.

The novel did keep its promise; it has a lot of a William Morris wallpaper. The descriptions and the writing are gorgeous. But what is really arresting is the combination and range of topics.

Bodies of Light tells the story of two generations of women. Elizabeth is married to the designer and painter Alfred Moberley. Beauty is most important to him. He pays attention to color and light, to fabrics and interior decoration, to every single detail in a furniture, wallpaper or painting. Elizabeth is quite different. She likes it sober. She doesn’t want to wear expensive, colorful clothes. Her mother taught her that she has to be modest at all times because there are so many poor women who have nothing. This strict, severe upbringing, in which every single minute is dedicated to helping the poor, has turned Elizabeth into a joyless creature. And she’s ill-equipped for motherhood. She hates being pregnant and once the girl is born she hates her and can hardly be forced to take care of her. On the other hand, her mother taught her to despise the ways of the rich. A nanny is out of the question. Whenever her husband, who is a kind man, wants to take care of Ally and pampers the child, Elizabeth tells him off. It’s easy to understand why this marriage isn’t a happy one.

May is born after Ally. While she will be treated in very strict ways as well, she will not be abused. Abuse is the ugly secret in the Moberly household. Ally is her mother’s mirror and instrument. Her mother mishandles and punishes her and forces her to become successful. What she calls strict is nothing bud thinly veiled sadism.

In spite of this – or because of this – Ally will become one of the first women doctors. When it’s time for her to study, she will leave Manchester and go to live in London. She’s learned from an early age that others have less, that women are mistreated and it seems natural for her to dedicate her life to the cause of women. But her family, especially her mother, looms like a dark shadow over her head. The question is – will she be able to free herself and find happiness?

The summary may seem gloomy and the parts dedicated to Ally’s upbringing, the many cruelties she had to endure on a daily basis, made me choke, but the book contains so much beauty. I liked how complex all the characters are. Even Ally’s mother, Elizabeth. She’s doing a lot of good, helping the poor selflessly, at the same time, she unleashes her sadistic impulses on her daughter. It’s something that we hear occasionally. A person famous for his/her altruism, is a tyrant, bully or even a sadist at home.

A major topic is women’s fight for the right to higher education, their fight to become doctors. The scenes at the hospital are quite drastic. Ally specializes in gynaecology at first but then discovers her interest in psychiatry.

At times it was shocking to see that, while we’ve come a long way, women still fight for many of the things they fought for in the 19th Century. Conflicting emotions about motherhood, for example, are still more or less taboo.

Bodies of Light is a remarkable book. The writing is taut and stylish and full of luminous descriptions. The topics range from art to motherhood, from medicine to women’s history, from psychiatry to abuse and, finally, to healing. The greatest accomplishment however, is that the opposing themes and characters of the novel are mirrored in the writing. The writing is at times pithy, at times lavish. It’s a fascinating, thought-provoking book from a very assured writer. We can look forward to her next books.