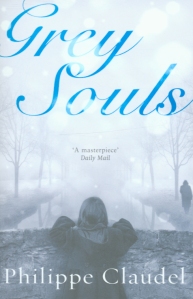 Philippe Claudel’s Les Âmes grises – Grey Souls is a crime novel set during WWI and a few years later. The narrator whose identity we do not know for a very long time, has decided, some twenty years later,  to write the account of a few tragedies that have happened during the war. He writes for his late wife who died in childbed. He could never let go of his grief and, as he says towards the end of the novel, he never really lived, he merely survived.

In a way, this survival, makes him feel his guilt even more deeply, guilt because he didn’t fight during the war. While so many men died, returned mutilated or went missing, he led a comfortable sheltered life but after his wife died, he didn’t really enjoy it anymore. He’s not the only one however to lead a sheltered life. While the war in the trenches rages and goes on for far longer than anyone suspected, the little town he lives in is spared because there is a factory and the men are needed as workers. And there are the many officials, who are spared as well.

At the beginning and at the heart of the novel lies a murder. An eight year old girl, called Belle de Jour, beautiful as a flower, is found murdered in a canal.

It’s a cold winter morning when the police and officials arrive and the girl’s body lies on a river bank, in the mud. The judge, who has been called to investigate, first eats his breakfast, without being the least bothered by the presence of the corpse. This initial scene sets the tone of the book. It’s grey and bleak. The good people die or despair, the bad go on living their unfeeling lives.

The narrative goes back and forth in time. Bit by bit, the story is unfolded. While Belle de Jour’s murder is at the heart, there are other violent deaths like the suicide of the beautiful school teacher, the narrator’s wife’s death and, much earlier than the story, the premature death of the prosecutor’s young wife.

In the beginning of the book the question “Who killed Belle de Jour?” is important, but once we know who it was the second half concentrates on the “Why?”.  At the time, a murderer was found and executed, but the narrator never believed that he was really the one. Twenty years later. still grieving and full of guilt, he starts another investigation and, this time, he finds the real culprit and his reason.

The book is dismal in tone and topic,  but highly readable and beautiful as well. I liked how the war was blended in as if it colored every aspect of the life. It is as if the novel has two layers, the people’s lives, the tragedies they encounter, the murder and beneath all that the raging war.

I read Belle de Jour’s murder and the way the little girl was discovered as a microscopic description of the war that captured, the ugliness, the absurdity, cruelty and utter senselessness.

The book also contains a profound and melancholic meditation on life and loneliness and how one single tragedy can turn a person into a living shell and lead to crime.

It takes quite a while until the reader understands that more than one murder has been committed in this book.

This was the first novel by Claudel I’ve read, but it will not be the last. It’s not cheerful but it has a strange, arresting beauty that I found wonderful.