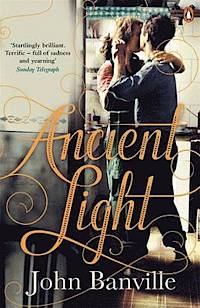 ‘Billy Gray was my best friend and I fell in love with his mother.’

In a small town in 1950s Ireland a fifteen-year-old boy has illicit meetings with a thirty-five-year-old woman – in the back of her car on sunny mornings, and in a rundown cottage in the country on rain-soaked afternoons. Unsure why she has chosen him, he becomes obsessed and tormented by this first love. Half a century later, actor Alexander Cleave – grieving for the recent loss of his daughter – recalls these trysts, trying to make sense of the boy he was and of the needs and frailties of the human heart.

It’s been a while since I last read John Banville. Ancient Light is his latest work. I didn’t know when I started it that it’s part of a trilogy, or rather one part of a triptych, Shroud and Eclipse being the other two parts. Luckily they can be read independently, but I’m sure it would be interesting to read them chronologically.

Alexander Cleave, whose story is told in Eclipse, is an aging stage actor. In Ancient Light he spends his days in an attic room, writing about his first love, Mrs Gray. He had an affair with the mother of his best friend Billy when he was only a boy of fifteen. Mrs Gray was a woman of 33. The way he remembers it, she seduced him in the pantry of the family home. Later they meet in the car and in an abandoned cottage where they spend long rainy afternoons. The affair lasts a few months and ends in disaster.

Alexander Cleave is a tormented soul. His daughter Cass committed suicide ten years ago and his acting career ended in an undignified way. His memories are more important than his present life and remembering Mrs Gray seems to be his escape route. But does he really remember it correctly? Did it start in spring or was it autumn? When did he see Mrs Gray for the first time?

The book is an exploration of memory and how it works, of how we distort even the smallest things and only when we compare our memories with the memory of others do we realize that things were very different.

All his life Alex wondered what became of Mrs Gray. While he writes down what he remembers, he gets a phone call from th US and is hired for a movie. It’s the first time ever that someone wants him in  a movie. He’s to play the part of Axel Vander, a mysterious dead critic. (His story is described in Shroud). From the moment when he gets the phone call until the end of the book the story moves between the story of his affair and the present.

Thanks to Billie Striker, one of the people working for the film crew, who acts like  some sort of private detective, Cleave finally finds out what happened to Mrs Gray and realizes that a lot of what he remembers was quite different and that he distorted a lot of the truth, misinterpreted facts and combined them to a story that was quite different from what really happened.

Banville is famous for his use of language. It is rare that I need a dictionary when I read an English book but I did in this case. A few of the amazon reviewers also mention that they had to use a dictionary, so it’s not due to the fact that English isn’t my native language but because Banville puts a lot of effort into finding specific words. His descriptions are detailed, lyrical, poetic and accurate. Many passages are very beautiful but it’s not easy reading. In the best passages, you are carried along by the beauty of the thoughts and descriptions and enjoy the way he writes, in  the bad parts it’s like walking in a bog. You hardly make any progress.

The story of the affair and the uncovering of what really happened was truly marvellous. Banville at his best. But the parts on the movie making were quite annoying. I hate artifice and there was a lot of that in these passages, beginning with the names. Banville writes his crime novels under the pseudonym of Benjamin Black, so very obviously he is fond of alliteration. I’m not. We find names like Marci Meriwether, Dawn Davenport, Toby Taggart and many more in this novel. They all belong to the people who are part of the movie crew. I found this quite heavyhanded. There are other elements I didn’t care for that much.

Overall I loved parts and passages of this novel, while other parts and other passages were quite artificial and annoying. This is very much Banville, he likes these games of mirrors and already in a very early scene there is  the evocation of a mirror image, when young Alex sees the naked Mrs Gray accidentally in a mirror.

One of my favorite scenes describes how Alexander confesses his affair to a priest called “Father Priest”. This is an amazingly humorous scene, the way the priest tries to find out what exactly Alex has done. The priest is sleazy and it’s obvious he wants detailed descriptions. This early passage addresses the moral aspects of the story. While Mrs Gray may very well have taken advantage of Alex’s youth, the priest is far more immoral.

What dampened the beautiful parts somewhat is the fact that young Alex is an extremely unlikable character. I’ve rarely read such a heartless description of an affair, such self-indulgent and self-centered behavior.

Banville writes beautifully and I liked how he explores memory. I truly liked the revelations at the end of the story as well. It wasn’t what I had expected at all. But I didn’t like the characters and I didn’t always care for the many artificial elements like alliterations, mirror images . Clearly, when Banville won the Booker Prize the jury didn’t have “readable” in mind.