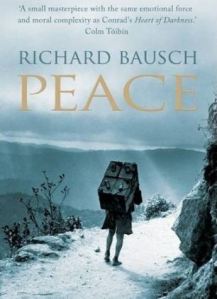 Richard Bausch’s Peace (2008) is set in Italy during WWII. An American  recon squad comes upon a group of people and a cart. A German officer and a German prostitute are hiding on the wagon. When they turn it around, the German officer opens fire and kills two of the young American soldiers. Corporal Marson shoots him, while Sergeant Glick shoots the woman in the head.

It’s the end of WWII and German troops are retreating but not without trying to take down anyone they can with them. The mountains are hostile territory, it’s cold and it rains constantly. The little troop of men is demoralized. The life of a recon squad is usually very dangerous, they have to find out where the German line is and might accidentally already be behind the lines. After the shooting of the officer and the whore, three of the men are sent on recon again. Sgt Marson, Ash and Joyner. On their way they meet Angelo, a frail and very old Italian man and force him to guide them.

Marson, Ash and Joyner are as different as three people can be. Marson is the oldest, he’s 26, married and has a child. Joyner and Ash are 20. Ash seems to be deeply traumatized by something he experienced in Africa and which wakes him every night. He seems to be a good sort but starts to annoy Marson because he wants to denounce Glick. The murder of the prostitute has shocked him and he thinks Glick should be brought to justice. While Marson agrees with him, he feels it’s not the right time and he has problems of his own. They are on a very dangerous recon mission, it’s very cold and raining. They don’t know where they are and have to rely on a man he doesn’t completely trust. Many of the Italians have surrendered, many never really participated but there are still a lot of fascists who would gladly kill them. Plus he fights a battle with his conscience. Before shooting the German officer he had never killed anyone up close and the memory of it makes him sick. Tensions between the four people would be high anyway but Joyner is an aggressive bigot, anti-Jews, anti-Communists, anti-drinking. But swearing and abusing people constantly which is a huge contradiction.

Matters get even worse when it starts snowing and they hear shots. They find a dead German and later hear more shots coming from a village where, as the old man explains, Jews are being executed.

The three men are really tested and have to go to their limits. They fight the cold, are in enemy territory, traumatized by what they have seen so far and by their conscience.

I must honestly say I was not too impressed with this book. It’s told in chapters alternating between the past of the three men, what they had experienced in Palermo and their actual recon mission. The central conflict or theme, drawing the line between justified killing and murder, is shown but it didn’t move me. The book exemplifies how much it meant for soldiers to kill, it underlines that in WWII shooting someone from up close was in no way common and could cause a huge problem, triggering moral conflicts. Unfortunetly I never felt that conflict.

It’s hard to say why this book did so not work from me. I felt Bausch wanted to tell a story that wasn’t his and I suspect he watched a few movies in order to get a feel for what it was like but ultimately I felt he couldn’t make this story his and tell it in a moving way. In this it reminded me of Coventry but looking back I’d say, I liked that much more.

I’m aware this is a bit of an uninspired review but I’m really unfazed by this book.

I hope others did read along. I’m very interested to hear their thoughts.

Peace was the ninth book in the Literature and War Readalong 2012. The next one will be Maria Angels Anglada The Auschwitz Violin – El violí d’Auschwitz. Discussion starts on Monday 29 October, 2012.