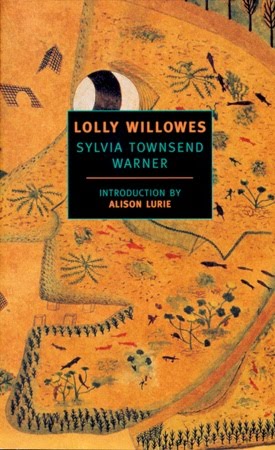 Lolly Willowes is a twenty-eight-year-old spinster when her adored father dies, leaving her dependent upon her brothers and their wives. After twenty years of self-effacement as a maiden aunt, she decides to break free and moves to a small Bedfordshire village. Here, happy and unfettered, she enjoys her new existence nagged only by the sense of a secret she has yet to discover. Finally that secret will set Lolly Willowes free.

Danielle (A Work in Progress) has an interesting series called Lost in the Stacks in which she introduces us to authors who have been forgotten or are not read much anymore. One of these authors was Sylvia Townsend Warner as you can read here: Lost in the Stacks – Sylvia Townsend Warner. Danielle mentioned that some of her novels are re-issued by NYRB or Virago and one of the titles Lolly Willowes looked especially interesting. And what a find it was. Not only does the novel tell the story of a unique and independent character but it is a lovely and very feminist book.

Until not too long ago the spinster was a character which could frequently be found in novels. I’ve read more than one novel containing either a spinster or which was about a spinster. They were mostly tragic and often infuriating. The way society treated these unmarried women who were clearly seen as a failure was not only condescending but very often exploitive. As Sarah Waters says in her excellent introduction to the Virago edition of Lolly Willowes, we can see the book to some extent as a re-write of older “spinster novels” like W.B. Maxwell’s The Spinster of this Parish (1922) and F.M. Mayor’s The Rector’s Daughter (1924). As the title of Townsend Warner’s book indicates, the topic has undergone a great change in her novel. The spinster has a name, she is no longer a helpless, independent appendage. Apart from being one woman’s story, the book contains also a subtle reflection on the times, just before and after WWI. The role of the spinster changed considerably after WWI. With so many young men gone, these unmarried elderly women were now seen even more as a useless burden.

Laura, called Lolly, Willowes lives with her father until the age of 28. When he dies her family assumes she will be better off living with her married brother and his family in London instead of staying in the country on her own. The loss of her father is a great tragedy for Lolly. She who lost her mother at an early age, loved living with her father and being relatively independent. She  was never interested in men or getting married. A quiet, introspective life, dedicated to her hobbies, botany and brewery, was all she ever wished for.

She disliked going out, she seldom attended any but those formal parties at which the attendance of Miss Willowes of Lady Place was an obligatory civility; and she found there little reason for animation. Being without coquetry she did not feel herself bound to feign a degree of entertainment which she had not experienced, and the same deficiency made her insensible to the duty of every marriageable young woman to be charming, whether her charm be directed towards one special object or, in default of that, universally distributed through a disinterested love of humanity.

Still she doesn’t make a fuss and follows her brother and his wife and stays with them for several decades. She doesn’t like it there, her sister-in-law is too well-organized, too strict, in other words too boring. She relies completely on her husband, never contradicts him and never seems to spend time on her own. In these surroundings Lolly undergoes a transformation which starts to alarm her more and more over the years.

Or rather, she had become two persons, each different. One was Aunt Lolly, a middle-aging lady, light-footed upon stairs, and indispensable for christmas Eve and birthday preparations. The other was Miss Willowes , ‘my sister-in-law Miss Willowes’, whom Caroline would introduce, and abandon to a feeling of being neither light-footed nor indispensable.

Before WWI breaks out, the Willowes spend all their summer months in the country. Lolly loves these stays and the memory of the beauty of the country side and her reception for everything related to the senses – scents, colors, aromas – open a door in her soul and offer an escape route. She often sits in front of the fire in London and dreams of being in the country on her own. This character trait gives the author the opportunity to include beautiful and evocative descriptions like this one.

At certain seasons a fresh resinous smell would haunt the house like some rustic spirit. It was Mrs Bonnet making the traditional beeswax polish that alone could be trusted to give the proper lustre to the elegantly bulging fronts of tallboys and cabinets. The grey days of early February were tinged with tropical odours by great-great aunt Salome’s recipe for marmalade; and on the afternoon of Good Friday, if it were fine, the stuffed foxes and otters were taken out of their cases, brushed and set to sweeten on the lawn.

After WWI, the society has undergone serious changes. Lolly feels restless. The children of her brother do not really need her anymore and she wants to leave. Finally she wants what her heart has been desiring since years; live in the country on her own. Her relatives are shocked. Her brother has to confess that he has lost a lot of her money due to reckless investments and she cannot afford the house she wanted. Nevertheless, nothing can hold Lolly back, she leaves anyway.

The second half of the novel is dedicated to Lolly’s life in the country. The village she has picked is very mysterious and slowly Lolly undergoes a transformation and becomes a witch. It may sound as if we were entering the realm of the fantastic here and to some extent we do, but the Satan we meet in this book, has more in common with Bulgakov’s Satan than with some fantasy figure.

I’m glad I discovered this wonderful novel. It has freshness and vivacity, is clever and witty and the descriptions are detailed and atmospheric, the portraits of the society and the people are true to life and Lolly is a very endearing character, an illustration of the importance of “a room of one’s own” and the right of women to live an independent life, even outside of society and without a man. It’s certainly one of the rare novels in which a being considered to be a useless burden on society shows that she doesn’t need society in order to live a truly happy and  fulfilled life.

Have you read this or any other of Sylvia Townsend Warner’s novels?