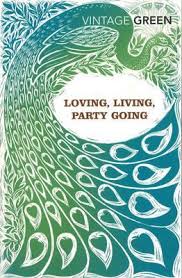 Take a handful of idle bored rich people, put them in a confined space and see what happens. A minor writer may turn this tested recipe into a dull and boring exercise, a major writer will produce an amazing piece of writing which isn’t only brilliantly well written but a psychologically accurate comedy of manners.

Heavy fog has trapped the members of a party about to board a train for France in a London railway station. They were to leave for a couple of weeks. Max, their host, organizes these parties regularly and who is invited and who is not is of great importance.  Surely they cannot stay outside on the train platforms in the middle of those brutal and vulgar masses who will end up drinking and singing, now, can they? So they leave their porters and their luggage outside and move into the railway station hotel where Max has reserved some rooms for them.

This stay at the hotel may have been comfortable enough, boring, yes, but sipping tea, taking baths and slagging off others behind their back is amusing for a while. Unfortunately Claire’s aunt has committed the indecency of falling ill and becoming quite the nuisance for all of them. It’s particularly horrible for Claire as everybody knows she will board that train, no matter what, but, before she can do so, she must convince the partygoers that she isn’t heartless, no, on the very contrary, it’s her aunt’s fault entirely. Nobody should dare falling ill and spoil other people’s fun. Here’s Claire talking to Evelyn about her aunt.

(…) absolutely everyone else is dead and mother’s abroad as you know. It’s rather touching that’s why she came to see us off really it’s her only link. No, but it’s not touching actually because she goes and gets ill. Oh, Evelyn, it’s so unfair, isn’t it?

I’m sure you have realized by now that these characters are far from kind or pleasant. They are a bunch of egotistic, selfish and spoilt people who take everything that gets between them and their pleasure as a personal affront. Be it the fog, the sick aunt or anything else.

What made Party Going such an incredible read is the way it is told. Point of views change constantly, people move from one person to the other and always pretend to be different from how they really are. What we see is exactly what we would see if we were present at that very moment with only a little background information on the motives and true feelings but no other background information whatsoever. Still I felt, I got to know these people better than some of those whose whole biography I have been informed of in other novels. While reading Party Going we feel like unseen guests eavesdropping on other guests who are all nasty and mean behind each other’s backs and constantly pretend to think or feel different from what they let perceive. Sometimes the deception is minor but on many occasions the discrepancy between the true feelings and what is shown is considerable.

When Alex came to an end and she had not properly heard what he had been saying so she said something almost under her breath, or so low that he in his turn should not catch what she had said, but so that it would be enough to tell him she was listening.

There are shocking moments in the novel. Especially when these people talk about the masses, the poor. They, of course, are a nuisance too. Their maids and porters are not perceived as human beings, they are just commodities.

“Would you like me to come down with you to see if we can do anything about your things?”

This seemed to Julia the sweetest thing she had ever heard, to offer to brave those frantic drinking hordes of awful people all because someone was upset about their charms (…)

There really isn’t a likable character in this book, apart from the enigmatic handsome Max whose two girlfriends both appear, although he thought he got rid of one of them. Max is very rich, generous and quite elusive. Kind to everyone but hard to keep in one place. He likes his drink too much and this is part of his charm, as we are told, because all the girls think they will be able to save him.

It’s like watching a movie, the dialogue, and the commentary that accompanies it, is fantastic. I know some people will think this too experimental but I thought this was maybe one of the most accomplished pieces of modernist writing I’ve read in a long time. It works like a clock. All the pieces fit into each other, all the little cogwheels gear into each other and move at a steady pace. More surprisingly, Green not only has an ear for dialogue and is a brilliant observer, he also writes quite beautiful passages.

It was so luxurious he nodded, perhaps it was also what she had put on her hair, very likely it may have been her sleep reaching out over him, but anyway he felt so right he slipped into it too and dropped off on those outspread wings into her sleep with his, like two soft evenings meeting.

The novel is available in a collection with two other novels Loving, Living, Party Going. I’m grateful to obooki for pointing out Party Going because I had planned to read Loving instead. Party Going is brilliant.

The review is part of Henry Green week hosted by Stu on Winstonsdad’s Blog. If you are interested, here is his introductory post. I know that quite a few people take part in Henry Green week and I’m curious to see what they read and how they liked it.