A nine-year-old boy is found murdered at the bottom of a well near a popular beach resort in southern Italy. In what looks like a hopeless case for Guido Guerrieri, counsel for the defence, a Senegalese peddler is accused of the crime. Faced with small-town racism fuelled by the recent immigration from Africa, Guido attempts to exploit the esoteric workings of the Italian courts. More than a perfectly paced legal thriller, this relentless suspense novel transcends the genre. A powerful attack on racism, and a fascinating insight into the Italian judicial process, it is also an affectionate portrait of a deeply humane hero.

Former anti-Mafia prosecutor Gianrico Carofiglio is said to write some of the best legal thrillers Italy has to offer. I am not an expert when it comes to legal thrillers but  his novel Involuntary Witness, the first in the series centering on Avvocato Guido Guerrieri, is really good. Guerrieri is such a likable character and the themes of the novel are varied, spanning from racism, immigration, relationships and marriage, the meaning of life, to the Italian criminal system.

Guerrieri has recently been divorced and is very depressed. At the beginning of the novel he has panic attacks, can hardly sleep. He is a vulnerable, pensive  man who likes to read, have long discussions about books, movies and music. He loves St. Exupéry, Picnic at Hanging Rock and the music of David Gray. As a criminal lawyer he has to do some dubious things and tries to ignore whether his clients are guilty or not. After all, he is paid to get them out, no matter what they did. But Guerrieri has  a conscience that’s why he often wonders if what he does is really right. He also lives dangerously occasionally.
One of the best parts of the novel is the change Guerrieri undergoes. The person at the beginning of the novel isn’t the same as the one at the end. Just to watch him, follow him, first through his misery and later when he starts to enjoy life again, feels so realistic. I started to believe after a while that the description was based on a real person.

Guerrieri is good at his job, no doubt about it. There is always work for him. We sense that Carofiglio knows what he is writing about. The descriptions of the city and the court, the people, the lawyers, judges, policemen, prosecutors are realistic. The series is set in the Southern Italian town of Bari, an attractive location, close to the sea. 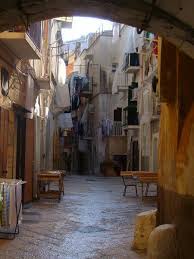 The story is rather simple. A nine year old boy is found murdered in a well. Due to some unfortunate circumstances a Senegalese immigrant is accused of the murder. The case looks hopeless as there is a lot of evidence against the man. Guerrieri isn’t even sure at first whether he should accept to defend him but he feels pity and finally accepts.

I wasn’t familiar with the subgenre of the legal thriller. At least not in book form. The focus is really on the trial and whether the accused will be sentenced or not. Guerrieri isn’t playing the role of an investigator. He thinks his client is innocent but he doesn’t try to find someone who might have done it or even find out why the child has been killed.

In Italy Carofiglio’s novels are considered to be much more than just thrillers and I can see why. The books seem to tell the story of an interesting man who happens to be a criminal lawyer and is excellent in his job, but this isn’t the most important element of the books. Guerrieri’s outlook on life, the way he sees and analyses people is far more important.

Involuntary Witness is an excellent book and I am certainly going to read the next in the series. I absolutely want to know what happens to Guerrieri and where life and love will lead him.

Do you know the series or any other legal thrillers that you like?