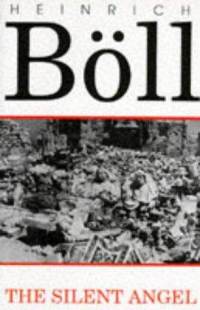 Written between 1949 – 1951 Der Engel schwieg  or The Silent Angel is unique in many ways. Unique for German literature but also in Böll’s work. I have already written about it in my post on Sebald’s The Natural History of Destruction. Böll’s novel, which is one of the rare to depict a German city after the massive bombings by the Allies, had to wait 40 years for its publication. For this reason many of the chapters have been re-used in other books and if you are familiar with Böll the one or the other scene or description may appear familiar. All the important themes of Böll’s work can already be found here. Criticism of post-war Catholicism, compassion with those who have nothing, with those who suffer. His books often circle around the same elements, motives and themes and although he doesn’t always use the same style, this gives the impression of a very organic work that, read in its entirety, gives an excellent panorama of Post-war Germany.

The Silent Angel is one of the most important works of the so-called “Trümmerliteratur” (the literature of the ruins). The story as such can be told in a few sentences. It’s May 8 1945. Hans, a deserter, returns from the war without a passport. He tries to find the woman of a comrade who died instead of him. While walking the bombed and destroyed city he meets a woman who lives in an appartment in a house that is almost a ruin. He feels a strong connection to her and asks her if he can stay with her. She has lost her baby in an air raid, his wife has died as well and so, like two castaways, they are stranded together in this apartment. At first they both envy those who died but slowly they find their way back to love, hope and some kind of livable future.

It isn’t said but we know that the city which is described is Köln, Böll’s hometown. The description of the despair of the people, how tired they are physically and psychologically is impressive. The way he depicts their struggle to find bread, their fight to survive in those ruins is powerful. There is one scene in which Hans tries to visit someone and to walk a distance which used to take him ten minutes, he takes an hour because of  all the debris and the rubble. As I said before, Catholicism is an important theme in Böll’s work and in this novel, in which the greed of some Catholics is shown in all its ugliness, the description of the bombed churches becomes a very significant additional meaning.

What impressed me the most apart from the descriptions of the ruined city is how tired these people are. They spend days and days on end in their beds, staring at their walls. Finding something to eat, moving about the city, coming to terms with was has happened, takes an unimaginable effort, drains them of all their energy. All they have left is exhaustion.

This must sound very depressing but Böll isn’t only a writer of despair. He describes hopelessness but his characters overcome it, they find hope and the courage to go on living. The negative people have their positive counterparts. The greedy Dr. Fischer who doesn’t care for anything but money and for whom Catholic artifacts are just collectible items finds his counterpart in the gentle priest who helps Hans. The priest is the embodiment of a pure, compassionate Catholicism.

I was wondering while reading The Silent Angel whether I thought it was well written. I think he could have improved the structure, some passages read like short stories, some elements could have been left out, all in all it feels a bit loose at times which isn’t the case in his later work. His later novels are much more condensed but Böll has a gift for description which is rare. And he represents a rare model of moral integrity, he is an author who wrote for those who have nothing, who tried to unmask hypocrisy and uncover everything that was fake and phony in post-war Germany. I don’t know all that many authors who are so humane.

I have read The Silent Angel before. It isn’t my favourite Böll novel but since it’s an excellent example of “Trümmerliteratur” it seemed a great choice for the readalong. I’m very interested to know what others thought of this book.

Rise (in lieu of a field guide)

I’m not sure all those who follow me for the Literature and War Readalong did notice that there was a change of title. It just didn’t feel right to read an American author depicting the Civil War during German Literature Month. This means The Killer Angels are postponed (?).

The choice for this month’s readalong is Heinrich Böll’s The Silent Angel aka Der Engel schwieg. This novel, by my favourite German writer, is a unique book. I will explore this in more detail in Thursday’s post on Sebald’s Luftkrieg und Literatur aka On the Natural History of Destruction.

Here’s the blurb for Silent Angel

The first novel by the Nobel prize winner, never previously published. Written at the end of the Second World War it describes the death and destruction faced by the people of a city ravaged by war.

The readalong is not taking place on Friday but on Saturday 26 November. Anyone who wants to participate just leave a link in the comments section of my post, I will then add it to my post. Those who have no blogs are welcome to leave longer comments or send me an e-mail with their thoughts before Saturday and I will add them to my post. Should anyone prefer questions instead of freestyle, let me know. I could send out questions but give me time until Wednesday 23 November.

Watch out for Wednesday’s giveaway…