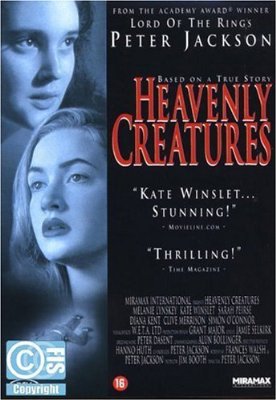 A while back Bookaroundthecorner left a comment on one of my posts mentioning that the author of Victorian detective novels, Anne Perry, had committed a murder when she was a young girl. I had never heard of this before and a google search soon led me to more details and to Heavenly Creatures by Peter Jackson entirely based on this story.

I watched it recently and must say it was an utterly disturbing movie. I’m not giving away too much when I tell you what actually happened as it also written on the DVD covers and descriptions of the movie and many people know it anyway. Pauline Parker (Melanie Lysnkey) and Juliet Henry Hulme (Kate Winslet) met in New Zealand in the 50s. The unlikely couple formed a friendship that soon became an obsession, they lived in dream worlds, made up stories and were completely dependent on each other. Juliet (the future Anne Perry) had a very fragile health, a reason why her parents often chose to send her away. The marriage of Juliet’s parents is not working and they want to get a divorce. They decide to send Juliet to South Africa. The girls hope that Pauline will be allowed to come with her but Pauline’s mother is against it. She doesn’t approve of their friendship, correctly senses how unwholesome it is. That’s when the tragedy unfolds. Pauline who hates and despises her mother develops a plan that should allow them to stay together forever. In minute details she plans the murder of her own mother.

The brutality with which they execute their plan is quite a shocker. I still see the pictures in my mind.

They get caught because Pauline carelessly writes down everything in a diary. Both are sentenced but are left out of the correctional institution after two years. There is a condition however; they are not allowed to see each other again.

It wouldn’t be a Peter Jackson movie without any fantastic elements. He chose to show the fantasies of the girls, their dream world. I think I would have opted for a more sober way.

The two actresses are very good, they manage to convey the folly of the two girls brilliantly.

I found the movie to be disturbing for many reasons. Not only because they kill Pauline’s mother, which is quite horrible in itself, but also because I was wondering how you could go on living with a murder like this on your conscience and on top of that being separated from the most important person in your life. I would be interested to know how Pauline dealt with this. I did pity these two deluded girls.

As I said before, this is a highly disturbing movie but one that will keep you thinking for a long time. Also about the narrative technique chosen by Peter Jackson. What kind of movie would this have been, done by another director?

Last but not least, doesn’t it strike you as  highly uncanny to know that someone who committed such a brutal murder makes a living writing murder mysteries. Is this a means to come to terms with the past?