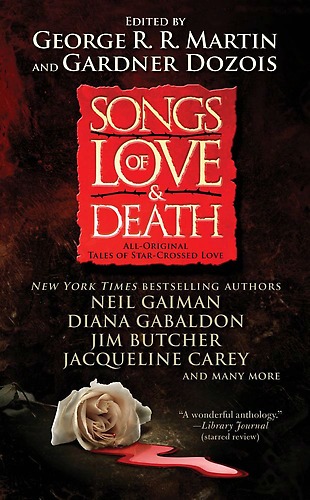 It took me over a year to finish this anthology. No wonder, Songs of Love & Death is quite chunky, over 600 pages. The individual stories are all rather long, around 50 pages each. The subtitle of the book is All-Original Tales of Star-Crossed Love which is not entirely accurate as most stories have a happy ending.

While I didn’t like all of the stories equally, I liked that there were so many different genres or rather sub genres of fantasy and romance. Historical Romance, Sci-fi Romance, Dark Fantasy, High Fantasy. Most of the authors were new to me but there were also people like Neil Gaiman, Peter S. Beagle, Lisa Tuttle and Tanith Lee.

Many people bought this anthology for Diana Gabaldon’s story A Leaf on the Wind of All Hallows. It’s a tale set in her Outlander series with characters who are important in the series or rather back story of some characters. I can’t say I liked it much. It’s the story of an RAF pilot on a mission to Poland. His plane crashes and he somehow lands in another time. He tries hard to get back to his wife and young son. I suppose that when you are familiar with the series that it’s an interesting story but when you are not it’s not very gripping.

That’s a problem of some of the other stories too. Many of the authors write series and the stories are set in those worlds. Reading just one small story about those worlds can be a bit confusing. Fortunately most writers submitted an original standalone story.

Each story comes with an introduction, naming the author’s genre and most important work. It’s certainly the first time that I have read sci-fi romance. It wasn’t my cup of tea but quite interesting.

These were my favourite stories:

Carrie Vaughn’s Rooftops is nothing special as story but the voice is charming and made me buy the first in her Kitty Norville series.

Neil Gaiman’s The Thing About Cassandra is typical Gaiman. So original. A story with a really stunning twist that shows that you have to be careful when you make things up.

Lisa Tuttle’s His Wolf was my favourite. It’s some sort of werewolf story but including a real wolf. The story as such is so realistic, the characters so well drawn, one forgets easily that it’s fantasy.

Peter S. Beagle’s Kaskia is a sic-fi story. Very eerie. Has the computer come alive or what is going on here?

Yasmine Galenorn is another writer I didn’t know. Her Man in the Mirror is a very unusual ghost/horror story of a man trapped between the worlds. It has a bittersweet ending.

I was quite disappointed in Tanith Lee’s story Under/Above the Water, and didn’t really understand Marjorie M. Liu’s dystopian vampire story After the Blood. Too bad, both stories are very well written.

With the exception of a few stories the anthology is much more romance than dark fantasy. If that is your thing, don’t miss it. But even if you prefer Dark Fantasy and Fantasy you will still find at least half a dozen really great stories. I guess what I liked most and what made this overall a really enjoyable experience was to discover so many new subgenres. That was really fun. A bit like eating a box of Quality Street.

Delia has reviewed this a while back here.

A warning for the George R.R.Martin fans – he is only the editor, he didn’t contribute to the collection.

Thanks to Grace (Books Without Any Pictures) I discovered that Carl from Stainless Steel Droppings has finally announced R.eaders I.mbibing P.eril VII.

There are different levels of participation. You can read as many books as you like or just one, stick to short stories or watch a movie.

And here are the genres you can choose from:

I’m in the mood for ghost stories right now and will certainly read the one or the other. I also just bought The Year’s Best Dark Fantasy and Horror.

The reviews can be posted here R.I.P. VII Review Site

Will you join? What are you going to read?

Autumn is slowly approaching and Carl’s eagerly awaited R.I.P. VI has finally started. Of course I’m joining. Here is what Carl wrote in his post.

Every September 1st through October 31st for the last 5 years I have hosted the R.eaders I.mbibing P.eril Challenge, affectionately known as the R.I.P. Challenge. I began this reader event, I blinked, and now I am hosting this for the 6th time. Wow, that is so hard to believe.

The purpose of the R.I.P. Challenge is to enjoy books that could be classified as:

The emphasis is never on the word challenge, instead it is about coming together as a community and embracing the autumnal mood, whether the weather is cooperative where you live or not.

I am going to aim high this year and want to read 4 books, watch a movie and join the group read for Deborah Lawrenson’s The Lantern.

I am not sure what I am going to read but here are a few ideas:

Daphne Du Maurier’s The House on the Strand

Alice Thomas Ellis The Inn at the Edge of the World

Jennifer Archer’s Through Her Eyes

Victoria Schwab’s The Near Witch

I wanted to re-watch Interview with the Vampire and the one or the other Vincent Price movie like Dragonwyck or House on Haunted Hill.

As written before, I will join the group read for Deborah Lawrenson’s The Lantern but there are two other possibilities if you’d like to participate.

If you want to join or know more about the details of the event here’s the link to Carl’s post.

My philosophy is pretty simple: any day nobody’s trying to kill me is a good day in my book. I haven’t had many good days lately.’ When her sister is murdered, leaving a single clue to her death – a cryptic message on Mac’s cell phone – Mac journeys to Ireland in search of answers.

What a romp. This was so much fun. If anyone has been looking for a Dark Fantasy version of Janet Evanovich’s Stephanie Plum series, there is good news, Darkfever is exactly what you have been looking for. This is the first in the series of this urban fantasy goes crime of Karen Marie Moning who is better known as a romance writer. Don’t get alarmed, this is not a romance novel although there is a certain undercurrent in it, no, this is a real whodunit, spiced up by some nasty supernatural happenings. There are also some explicit sex scenes and judging from Book Rain’s review, the series is getting steamier from book to book. I’m grateful I read her review because now I know that not only the series ends, but that it is rather like a whole novel in five parts. Although part one has some sort of denouement, the end is a cliffhanger.

Mac (short for Mackayla) is a very naive character. She is also clumsy which is a common cliché in paranormal crime. And she was definitely into the Disney Princesses as a child and still loves pink more than anything else. But having a character like that encounter dark and malevolent beings makes for slapsticky fun.

Trying to overcome the grief over her sister’s murder and in attempt to urge the police to solve the crime, Mac decides to take things into her own hands and flies from the US to Dublin where her sister studied. Before her sister died she left a cryptic message on Mac’s cell phone saying that she had been wrong about someone and something needed to be found. All this is very strange and as soon as Mac arrives in Dublin things get even more mysterious. Despite an intense aversion she befriends Barrons, the handsome but moody owner of a book shop.He agrees to help her find the murderer of her sister but only because Mac can help him find an old and very dangerous book.

Mac, as she soon finds out, is what is called a Sidhe-Seer, someone who can see faeries and other supernatural creatures. This helps her to avoid that some encounters end deadly but it also exposes her. The moment faeries know she can see them she is a threat to them and they hunt her. Additionally she can spot magic objects and since absolutely everyone in this novel seems to hunt for the same magical book Barrons is after, they are all threats to her.

This is a fast-paced novel in which a lot of the action takes place in unlit streets roamed by dark creatures. It’s a decent crime story too and there are a lot of other riddles to be solved and characters who have a hidden side which makes it well worth reading.

In any case, this was a true guilty pleasure and I will definitely read the next in the series.