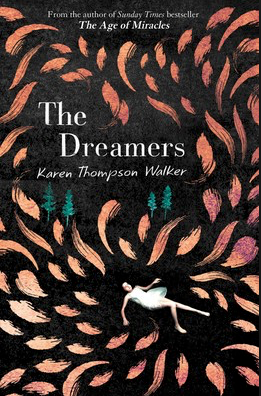 Karen Thompson Walker’s first novel, The Age of Miracles, was my favourite book of 2013. I adored that book so much. It’s mood, tone, and intriguing premise stayed with me. Needless to say that when I saw that she finally had a second novel out, I had to read it.

The premise of the The Dreamers is maybe not as intriguing as the apocalyptic premise of The Age of Miracles, but it’s still interesting. In a small college town in Southern California, a girl falls asleep and doesn’t wake up anymore. Soon there’s another one and then another one until there’s an epidemic. The city gets cordoned off. Nobody can enter, nobody can get out. More and more people fall asleep and don’t wake up. They all have one thing in common—they seem to be dreaming constantly. When the first girl dies, people get even more alarmed. The hospital is flooded and many of the staff fall asleep as well. Soon there are almost more sleepers than people awake and many of the sleepers die.

Unlike her first book, this one is told from multiple perspectives. The main characters are – two small girls whose father’s a survivalist, two college kids, a psychiatrist from out-of-town, and a husband and wife with a tiny baby. It was interesting to see the story told from many angles but unfortunately, it also meant it didn’t have the impact of The Age of Miracles. There was no specific tone or mood, just good-story telling. I definitely wanted to know why they fell asleep and what would become of them.

Once I finished it, I had to admit I felt underwhelmed. I thought at first that it was because my expectations were too high but then I realized that it reminded me too much of Camus’ La peste. It’s possible that this is just an unfortunate coincidence, but it’s equally possible she meant this as some sort of retelling. I didn’t read any other reviews or author interviews, so I have no idea. Unfortunately, for her, it’s hard to compete with Camus. That said, I’m sure many people will love this as it explores a topic we’re all, to some extent, afraid of – the outbreak of an epidemic. Her approach isn’t personal but social. She explores how fear affects people. She looks at the moral choices people make to either save themselves or help others.

There’s a quote from Catherine, the psychologist that I like a lot:

Worry, she reminds her patients, is a kind of creativity. Fear is an act of the imagination.

Seeing how people react to this unknown, contagious, and potentially life-threatening affliction illustrates the quote. People’s behaviour depends so much on what they imagine will happen.

The book also does ask some universal questions about illness and morality. There are so many who fall asleep and need help that, after a while, those still in good shape have to make choices who they will help. Someone they know? A younger child instead of an older person? Randomly? And what about pets – once food gets scarce inside of the city, should they still be fed?

Given the title, which isn’t The Sleepers but The Dreamers, it’s not surprising  that the nature of reality is another important theme. How do we really know we’re awake when sometimes dreams are so vivid we can’t tell we’re sleeping?

While I was a bit disappointed, expecting something with a similar tone and mood to her first novel, and because it reminded me of Camus, I still found this a compelling book. Her writing flows so well and the pace and structure are very balanced. And there are so many topical themes that make it ideal for a discussion group.