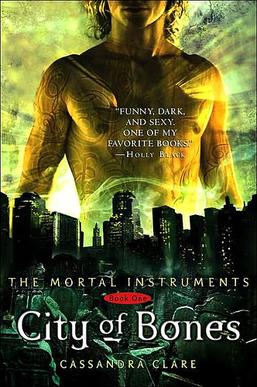 A couple of weeks ago I watched the movie City of Bones and liked the imagery and the story so much, I had to pick up the book. The movie got dreadful reviews; it seems I’m the only one who really liked it. The book was said to be much better. It’s tricky to read a book after having watched a film with such stunning visuals. For the first 200 pages I didn’t really see the descriptions of the book but the movie images. After that I got a better feel for the book because it contained some major plot elements which had been left out in the film.

The story might be familiar to you by now. Clary and her best friend Simon live in New York City. One night they go to the Pandemonium Club and Clary witnesses a murder. Funny enough Simon can’t see anything. Neither the murder, nor the people who commit it. When Clary’s mum is abducted a little while later, and Clary is attacked by a demon, it dawns on her that the life she has been living might have been a lie.

Together with her friend Simon, Jace, one of the guys who committed the murder, and his friends, she embarks on a big adventure. Clary like Jace is no real human. She is a shadow hunter. Shadow hunters kill demons, but they co-exist with downworlders like werewolves and vampires. I’m not going to write much more about the plot as it’s one of those that is easily spoilt.

I thought the movie did a good job at tightening the plot. Maybe if I had read the book first, I would have missed the scenes and episodes that were cut but I thought they were not that gripping. Clary’s interior monologue in the book is often silly, like when she wonders why there are only good-looking vampires. I’m going to spare you her reasoning. It’s NOT clever. Interestingly though, the greatest appeal of the book are the dialogue sections. Jace, Clary and Simon and not only witty but very sarcastic, which made me chuckle quite a few times.

Overall I would say, book and movie both have their strengths, but I prefered the movie because I absolutely loved the imagery and the interiors they created – the club, Clary’s house, the church in which the shadowhunters live.  I also liked that they made the plot so much tighter. And I thought the cast was perfect.

What I didn’t like so much in both lies in the nature of this specific type of story. There are numerous ways to tell (urban/dark) fantasy stories. I tend to prefer those in which magic/fantasy are part of the world the characters live in, and their existence are known by everyone, or when the main character is part of the paranormal world. Normal humans who are thrown into a paranormal situation or who discover at the beginning of a book that they aren’t entirely human are just not as appealing to me. I find that these stories stretch believability too much. At the beginning of City of Bones, for example, Clary is a normal teenager and after only one day, she’s immersed in a paranormal world she never knew existed, her mother’s abducted, she’s attacked by demons, werewolves and vampires, but she accepts this without questioning it too much. This premise can work sometimes. Neil Gaiman made it work in Neverwhere, but often it feels unrealistic.

Anyway, it’s an entertaining book and I might even read part two, if only for the dialogue. If there is another movie, I’ll certainly watch it.

This is my first contribution to Carl’s Once Upon a Time Challenge. Don’t miss the review site, which can be found here.

24 thoughts on “Cassandra Clare: City of Bones (2007) Mortal Instruments I Book and Movie”