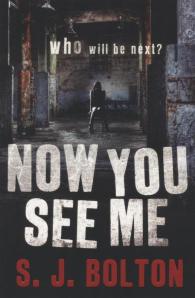 I’m one of those who is fascinated by the story of Jack the Ripper or rather its mystery. I’m sure, if the crime had been solved, I would care far less, but those many questions  – Who was it and how did he get away with it? Why did he stop? Why did he choose prostitutes? – will never be answered, it will always compel people to speculate and add their own interpretations.

S. J. Bolton must have felt the same fascination and Now You See Me, her take on Jack the Ripper, is a gripping read. DC Lacey Flint, her main protagonist, has always been interested in serial killers. Jack the Ripper is just one of them but one she’s studied in detail. 120 years to the day after Jack the Ripper has killed his first victim, a woman is savagely murdered in London. And DC Flint is the one to find her. Other victims follow, always on the same day the Ripper killed one of his victims. Is this new murderer a copy cat? Why is he interested in Lacey?

Detectives Dana Tulloch and DI Mark Joesbury are in charge of the investigation. When they notice how much Lacey knows about the Jack the Ripper and that the murderer seems to take an interest in her, they include her in the investigation. Joesbury mistrusts her in the beginning, which is unfortunate for him, as he’s also attracted by her. He knows that Lacey had a troubled past. Not one that a police officer should have. She had problems with drugs and delinquencies are mentioned.

Now You See Me is a page-turner. A police procedural combined with a thriller, which makes for suspenseful reading. This isn’t my first S. J. Bolton. I’ve read Sacrifice before. While I really enjoyed both of her books, they are both flawed. There is always a moment in her books when believability is stretched just a tad too much. If she wasn’t so good at atmosphere, suspense and interesting characters, she wouldn’t get away with it, but since she is great at those three aforementioned elements, I forgive her easily and will certainly read another one.

Danielle wrote a great review of Now You See Me here.

Have you read S. J. Bolton? Which is your favourite?

This is my fifth RIP review. Don’t miss visiting the RIP review site for other Mystery/Crime/Thriller/Ghost/Dark Fantasy related reviews.