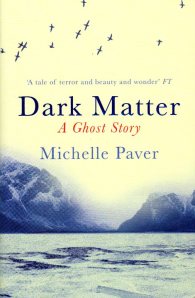 It’s been raining for weeks and very cold. It feels a bit like autumn, which could explain why, all of a sudden, I was in the mood to read a ghost story.

Dark Matter starts in London in 1937. Jack’s life isn’t going the way he was hoping it would. When he is offered the opportunity to accompany an expedition to the Arctic he accepts gladly. It sounds like the chance of a lifetime. Together with four other men he is to leave London just before summer. They will overwinter in Spitsbergen, or, to be more precise, on the fictional island of Gruhuken. When they arrive they are amazed how much life there is in the Arctic in summer. So many animals, so much light. By the time they have set up their camp, only three men and a pack of huskies are left.

When the nights get longer and the daylight is about to disappear for a couple of months, Gus, one of the remaining men, has appendicitis and needs surgery. His friend Algie leaves Gruhuken with him. Jack stays behind on his own, he wants to save the expedition. The two men promise to be back in a couple of weeks. Although the idea of eternal darkness frightens Jack, and the fact that he senses a malevolent presence near the camp doesn’t make it any better, he still wants to prove himself and please Gus.

The novel is told in form of a diary. In writing it, Jack tries to make sense and stay sane in the long dark Arctic night. Allusions by the captain and a trapper confirm what he felt early on: there is a dark presence lurking outside. When he discovers Gus’ diary he learns that he and Algie saw something too.

Most ghost stories are deeply rooted in their setting which is one reason why I like them so much. Haunted houses are my favourites but extreme weather conditions and wild landscapes are ideal too. I must say, to set this story during the cold and endless nights of the Arctic winter was a terrific idea. While the haunting as such wasn’t that creepy, to image what it would be like to spend days and days all alone in the darkness was scary. There is an instance in which Jack gets lost in the night and I could feel the dread. He couldn’t just wait until morning, as the morning would be as dark as the night, so he stumbled around blindly, got panicky and almost gave up. I found it equally unsettling to imagine living inside of an illuminated cabin located in the middle of nowhere and to never know whether someone was outside looking in or not.

Michelle Paver has spent a few times in the Arctic, in summer and in winter, which is certainly the reason why the location is rendered so well, everything was captured in such vivid details.

The story has another layer, which is even darker than the setting or the haunting. In a few scenes Paver manages to say more about cruelty than many other authors I’ve read before. There were two scenes in which cruelty against animals was described, both of which I found very unsettling. The history of the ghost was equally sordid. In some ways you could also say that the cruelty and injustice of society was another main topic. Those who are well-off have all the chances in the world, while people like Jack who come from a humble family or very poor people like the trapper, will always be taken advantage of.

It was interesting to read this novel just after having watched The Wall. While The Wall isn’t a ghost story, the dread and menace are very similar. Nature and loneliness are seen as hostile but ultimately what is to be feared the most are other human beings.

Dark Matter is a wonderful book, I really loved it. It is scary in more than just a supernatural way and works on many levels. Anyone who loves a good ghost story, has an interest in the Arctic or a love for dogs would like this book.

I’m still in the mood for ghost stories and would love to read some more. Has anyone a suggestion? Do you have a favourite ghost story?