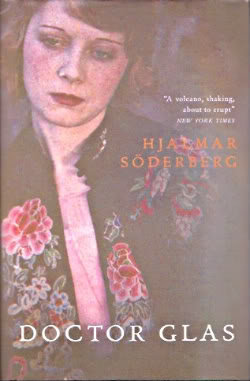 The haunting tale of Doctor Glas takes place in Stockholm during the closing years of the 1800s. The doctor, a troubled and compassionate man, relates the strange story of the Reverend Gregorius and his pretty wife. Gregorius, an elderly and offensive pastor, has endangered her physical and mental health. She consults Doctor Glas, who for the first time violates the ethics of his profession and uses a highly unorthodox method of helping her. But when the wife takes a lover, and Doctor Glas becomes emotionally attached to her, an intolerable situation develops. The uxorious pastor dies, poisoned. The aftermath of his death and the doctor’s unforeseen reactions to it bring the story to a chilling, horrifying close. Originally published in 1905, Doctor Glas is a novel of extraordinary immediacy and frankness. Its concerns – sexual incompatibility, abortion, euthanasia – together with its psychological insights, make it a remarkably modern work.

I’m so glad I’ve discovered this book on Danielle’s blog (here) not too long ago. I haven’t read a lot of Swedish literature. I’m familiar with some names, like Strindberg, Lindgren, Lagerlöf, and Lars Gustafsson but I hadn’t heard of Söderberg. I tend to read books from Scandinavia in German and Söderberg’s novel Doctor Glas wasn’t available in Germany anymore. It has just been republished for the first time last year following the success of another Swedish writer, Kerstin Ekman, who wrote a book called Tagebuch eines Mörders (Diary of a murderer) in which she tells the fictitious story of how Doctor Glas told Söderberg about the planned murder. Her novel led to the rediscovery of Söderberg’s controversial book. It was considered to be very scandalous when it came out. That’s not surprising as some of the topics (abortion, euthanasia) still lead to heated discussions.

Doctor Glas has been compared to Zola’s Thérèse Raquin and Dostoevsky’s Crime and Punishment. I would add Schnitzler to these two as there is clearly another dimension to this story which seems influenced by depth psychology.

Doctor Glas is written in form of a fictitious diary. The diary is kept by the doctor himself. The book is set during one hot summer, in Stockholm towards the end of the 19th Century, and tells the story of a murder.

Doctor Glas is a loner and a very sensitive man who is filled with disgust by anything all too human. He’s in his thirties and has never had a relationship or any physical contact with a woman. It’s not that he never felt attracted but he thinks too much about it and it starts to look absurd and revolting to him. The summer during which the story begins, is hot and sweltering. Couples meet in the dark in the cemetery below his window. He can hear and sense them, and after a while he cannot shut himself off anymore.

The elderly Pastor Gregorious is a man who more than any other fills Glas with disgust. He looks revolting and has an obnoxious character. Imagining him with his young and beautiful wife is awful for Glas, all the more so as he is secretly in love with her. One day she comes to see Glas and asks him for help. She wants him to tell her husband that he cannot have sex with her as she suffers from an illness. She then tells Glas that he forces her and even rapes her when she is not willing. This shocks Glas so much that even though he knows she loves someone else, he decides to free her one way or the other.

The story line circling around the planned murder reminded me a lot of the above mentioned books by Zola and Dostoevsky but the way the inner life of Glas is rendered, the descriptions of the weather and the nature, his thoughts, emotions and dreams seem influenced by depth psychology and reminded me of Schnitzler. It’s this aspect that made me love the novel. But there is another dimension. The book covers a lot of themes. Adultery, abortion, free love, marriage, euthanasia, murder, guilt. It’s almost endless and highly fascinating. What I found the most interesting are the thoughts on love, marriage and sexuality which made this a very modern novel. This reminded me of another Swedish author, Carl Jonas Love Almqvist whose much earlier novel Sara Videbeck and the Chapel (1839) is equally ahead of its time. It’s the story of a young woman who doesn’t believe in marriage and thinks that a relationship suffers if people are too close and live together. The very same spirit can be found in Doctor Glas only the story is bleak, as Doctor Glas, unlike Sara, is a very troubled mind.

I wrote in the beginning that the novel is set in Stockholm. Stockholm is much more than just a setting, it’s one of the topics of the book. Glas hates the country and loves the city and many of his entries describe the beauty of Stockholm. The initial descriptions of his diary entries always capture a special sight, the blue moon over the cemetery, a walk through the city, a famous building.

Doctor Glas is a rich, multi-layered book which has not only put me in the mood to read more Swedish authors but to finally visit Stockholm. If you like books which take a look into the darkest corners of troubled minds, this is for you. I loved it.