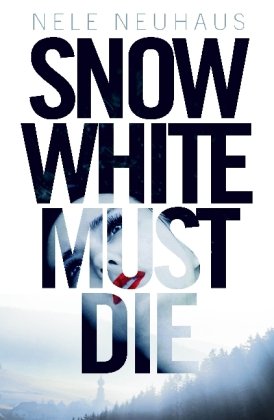 Nele Neuhaus has just been published for the first time in English (Snow White Must Die) and I thought that was a good opportunity to see for myself what this highly acclaimed German crime writer has to offer. Neuhaus entered the German crime scene with her self-published  novels. They were so successful that a big German editor bought them and re-edited and re-published the first ones and now her later novels too. Her very first book was a standalone called Unter Haien (Among Sharks), the second was the first in a series. What has currently been published in English is the fourth volume in the series with Chief Inspector Oliver Bodenstein and his colleague Inspector Pia Kirchhoff.

I like to start series with the first book and since I read German, I bought it to find out what the fuss was about. There is a new crime writing star every few years in Germany, some like Charlotte Link have been popular for years, others, like Neuhaus are new. At the moment, whenever Neuhaus publishes a book, it will be a huge success with hundreds and hundreds of amazon reviews.

Now on to the book. In German it’s called Eine unbeliebte Frau – An unlikable woman. A young extremely beautiful woman is murdered and the inspectors soon find out that she had a lot of enemies. It’s a classic whodunnit. As I said, I read the first in the series and it became quickly obvious why the English editor went for no. 4. I enjoyed it, I thought it was very gripping but not in a manipulative, cliffhanger-at-the-end-of-every-chapter kind of way. Rather in a laid back way. I liked that. What didn’t work so well was the way the two inspectors were introduced. It seems this gets better from book to book. They are a bit pale in this one. Bodenstein less than Kirchhoff but still, they don’t feel like characters in a series yet but rather like inspectors in a standalone police procedural.

The story as such is gripping. There are at least 6 or 7 suspects and it takes almost the whole book to make clear what happened. I liked that.  I also liked what little we get to know about Kirchoff and Bodenstein, despite the fact that they are a bit pale, not very charismatic.

The setting of the books is the Taunus region, near Frankfurt. Frankfurt is one of the biggest German cities and also one with a high crime rate. There are quite a few crime series and novels set in this town, the best known are certainly the Kayankaya novels by Jakob Arjouni who just died a few weeks ago. Choosing the Taunus region, and not the big city was a deliberate choice. It allows much slower stories and to integrate one of the core themes of the series, the wish of the two main characters to start a new life which should be less stressful and closer to nature.

While this may not have been the most exciting crime novel I’ve ever read, nor is it literary – the writing gets the job done, it’s not refined -, it’s still a solid police procedural. It is well constructed and with a nice pace. I thought it was a promising start to the series which introduces good-natured characters, and I know I’ll read another one sooner or later. For English readers the good news is that it seems you can start with no. 4 and you will not miss out too much. No. 6 in the series has just been published in Germany. If you like your crime gripping but not too fast-paced, this is a good choice.