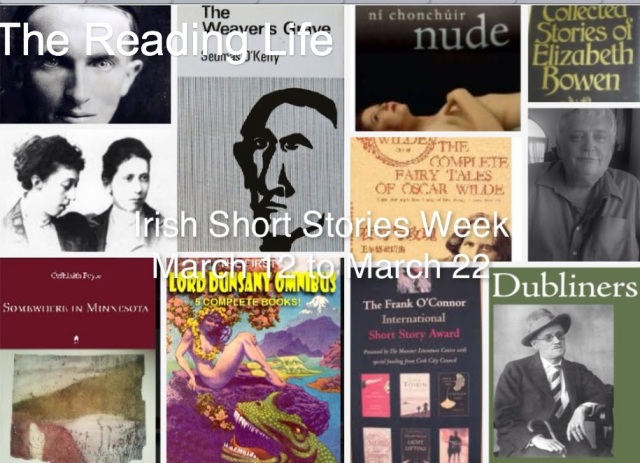 I had some plans for Irish Short Story Week but as usual I ended up reading mostly something else. I discovered two new short story collections which contain a wide range of stories. One is The Granta Book of the Irish Short Story(2011), edited by Anne Enright, the other one, New Irish Short Stories (2001), was compiled by Joseph O’Connor.

Anne Enright’s introduction to The Granta Book of the Irish Short Story was particularly interesting as she writes about short stories in general and underlines that the Irish have a very distinct short story tradition. Here is my favourite quote from her introduction:

I am not sure whether the novel is written for our convenience, but it is probably written for our satisfaction. That is what readers complain about with short stories, that they are not “satisfying”. They are the cats of literary form; beautiful but a little too self-contained for some readers’ tastes.

Kevin Barry is a writer I wasn’t familiar with. He is one of a very few who has a story in both collections. I read one from New Irish Short Stories called Beer Trip to Llandudno. What a hilarious story. It tells about a trip of a group of fortysomething men who regularly take trips to towns and cities just to sample the local beer. They move from one bar to the next and from pub to pub. Drinking beer is more than a hobby, it’s a religion. They take it extremely seriously and discuss the taste and flavour in minute detail. At the end, they rate the beer according to a complicated system. Of course, the more beers they have sampled, the more they are drunk and the trip gets farcical. If the story had ended there it would have been amusing but Barry goes much farther than that. He manages to convey a whole life in a few random sentences, in one or two allusions to side stories, he shows us more than a few guys on a beer trip but a group of human beings who have suffered, hoped, lost their dreams and  adjusted to life in various ways. Still, despite a lot of heartache and disappointment, they have kept their joy of life, their humour and their enthusiasm. Barry has only written one novel so far, City of Bohane which came out last year. Needless to say that I ordered it. This is a writer with a rare gift and I would love to read his novel.

This is the cool, comic, violent and lyrical debut novel from one of Ireland’s most talented new writers.

Elizabeth Bowen’s Summer Night is one of her most famous short stories. I found it in Anne Enright’s collection. It’s a beautiful, evocative story that takes place on a summer night in the Irish countryside. At the beginning a woman speedily drives a car through the landscape, seeing the sun go down and how everything is transformed by the softness of the light. Only the houses on a hill in the distance are still bathing in the sunlight. That’s where she is going but we do not know it yet. The point of view changes after a few pages. We do now see a scene in a large country house. A phone is ringing. The point of view changes again and another phone rings. We meet the people in those other houses, we know that they are linked to the woman in the car who is the one ringing but we don’t know what is going on. It will take the whole 30 pages of the story for us to find out the secret at the heart of the story. The character descriptions are masterful and the dynamics between the people very complex and subtle but what I liked most about the story was the description how the summer night transforms the surroundings, how the changing of the light seems to cast a spell over the landscape.

James Joyce’s Araby was the third short story I read. It was actually a re-read. I wasn’t aware when I wrote my introduction that Araby was the short story which was the reason why Dubliners is one of my all-time favourite books. I don’t want to write too much about it, I’m afraid my words would dispel its magic. It’s an enchanting, lyrical story that has a lot in common with Elizabeth Bowen’s Summer Night. I would call both stories, twilight stories. Twilight because at one point they describe the light at sun set but also because everything is half-hidden, half revealed. The feelings are hinted at, nothing is in the open. While Bowen’s story is a summer story, Araby is set in winter. What is interesting is to imagine the two stories like paintings. One is a softly colored summer painting, the other captures the darker colors of winter.

I read the three stories as a contribution to Irish Short Story Week hosted by Mel u from The Reading Life.

Reviews and further suggestions can be found here.

How is your Irish Short Story Week going? Have you found anything interesting?