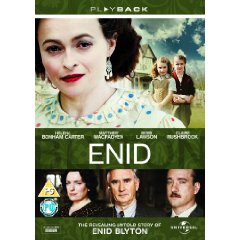 How I loved this movie. Enid is absolutely great and I am glad I bought it as I will watch it again very soon.

I am such a fan of Helena Bonham-Carter and have always been ever since I first saw her in A Room with a View that gorgeous Merchant-Ivory production. And I am also a fan of period drama and movies about the lives of authors. I totally enjoyed Finding Neverland and was enchanted by Miss Potter. A BBC production about the life of Enid Blyton seemed just the thing to look forward to. I was not disappointed. It is very good and Helena Bonham-Carter is, as so often, at her very best. However, as good as it is, it was absolutely not what I had expected. Of course, like most children, I did read Enid Blyton. Maybe not as many books as a British child would read but still quite a few. I had no idea what kind of a person she was. At best I thought of her as a Beatrix Potter type of woman or maybe like Astrid Lindgren who invented Pippi Longstocking. Enid Blyton was nothing like this. She was a complex, tormented and at times frankly mean person if we should believe this movie. Still she is fascinating and to look into the life of a writer is always interesting.

When she was a young girl her father, whom she was very attached to, left the family. It seems as if she never recovered from this trauma and fled into her dream world where she dwelt in a never-ending childhood full of adventures. At an early age she started to write down those stories. Being also a very determined person, she managed to find an editor who later became her first husband. As much as she loved her little readers and was totally addicted to her fan mail, she hated babies and did not get along with  her own children that she treated like trained monkeys.

She constantly escaped into her dream world and lied about a lot of things to herself and to others. When her mother dies she is really shattered. And so is her family since no one knew she had still been alive.

Enid Blyton wrote some 750 novels. She wrote 6000 words a day. At a certain point of her career she was accused of not writing all of her novels herself. She was almost devastated by this rumor. All in all, we see a very fragile person, a very self-centered and selfish person too. But still someone with a great talent.

The movie is beautifully filmed. The way she dresses, paired with  her eccentric ways, make the Enid of this movie appear like a fairytale character. Sure,  a bit of a wicked witch, but far from the ordinary. Despite the depiction of the negative aspects of Enid´s character, all these elements together make this a very enchanting movie.