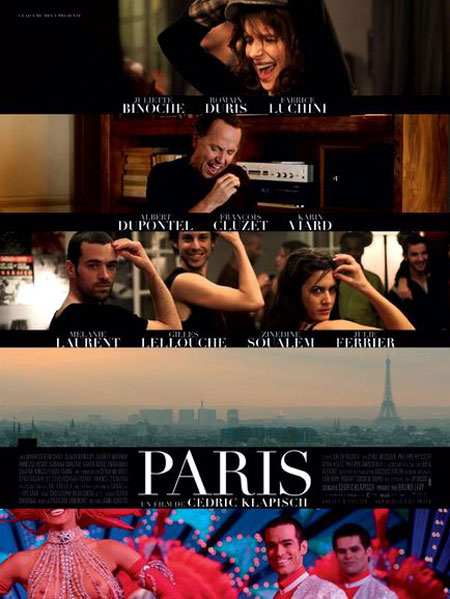 I watched this movie as part of Book Bath‘s and Thyme for Tea‘s event Paris in July.

Paris is an absolutely charming movie and I’m sure it will appeal to many people because it combines a good story with interesting character portraits, wonderful pictures of Paris and a great cast (Juliette Binoche, Mélanie Laurent, Fabrice Luchini, Albert Dupontel and Romain Duris). I feel really homesick now.  All the places to which I used to go while I lived in Paris can be seen: La Place de La Sorbonne, the Jardin du Palais Royal, the Bibliothèque Nationale. But we also see Ménilmontant where I used to live briefly after I had finished school.

Paris tells one main story, different smaller side stories branch out from it. The people of the main and the side story are only connected because they live in the same town and their paths cross but they don’t get to know each other. Parallel storylines don’t always work well but in this movie they complete each other and the outcome is nicely rounded. The movie has really only one flaw, a brief “All-you-need-is-love”-moment towards the end of the film. Watching this short part was like biting on a lump of sugar in an otherwise tasty cake.

The central characters are Pierre (Romain Duris) and Élise (Juliette Binoche). Pierre is a professional dancer whose best friend is his older sister Élise, a fortysomething divorcée with two kids. At the beginning of the movie Pierre is diagnosed with a serious heart disease that means his career as a dancer has come to an end. He is condemned to stay in his apartment and watch life go by. This offers a great opportunity to have him observe people, one of them is the beautiful Laetitia (Mélanie Laurent). Whenever Pierre is alone, walking the streets of Paris, mourning his career, contemplating his possible death, his reflections are accompanied by the music of Erik Satie. I liked that touch a lot.

Élise doesn’t belive in love anymore. She has been disappointed, doesn’t want to risk falling in love. When she goes shopping for her brother to the street market, near where he lives, she meets one of the vendors (Albert Dupontel) and there seems, from the beginning, a possibility for something between them.

Roland Verneuil (Fabrice Luchini) is an elderly professor of history. His story was for me the most touching. We learn about it because he falls in love with one of his students, Laetitia who lives in an apartment vis-à-vis of Pierre’s flat and he watches her. Verneuil is insecure but at the same time there is a lot of passion in him that has been stored away for a long time. Falling in love with a student reawakens him and brings out a very different person. There is nothing sleazy in this older man falling in love with a young woman. Unfortunately the beautiful Laetitia is one of those good-looking women who enjoys not only to play with men but who also likes to inflict pain. A nasty piece of work.

I loved the melancholy end of the movie. We  know from the start that there isn’t a lot of hope for Pierre. He needs a transplant and he may or may not survive the surgery. The last scene shows him travel through Paris in a taxi, on his way to the hospital.

Paris is a beautiful and touching movie and a homage to a city. I liked it even better than Paris, Je t’aime which isn’t bad at all either.