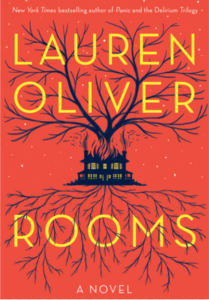 This is a carryover review from last year. I finished the book before Christmas and wasn’t even going to review it at first – like so many others – but since it’s new, I thought it would be good to write about it anyway.

Rooms is Lauren Oliver’s first book for adults. She’s famous for her YA novels, Panic, Before I Fall and the Delirium trilogy. I haven’t read them, so I came to this novel without any preconceptions. I only knew it was said to be a rather unusual ghost story or – to be more precise – a haunted house story. I do love ghost stories and haunted house stories and the mini-review I read was so appealing that I had to try it.

Richard Walker died, leaving behind a huge country house. At the beginning of the novel his estranged family, – his ex-wife Caroline, his daughter Minna, her young child Amy, and his son Trenton – arrives to take possession of the house and his things.

The house is occupied by two bickering ghosts, Alice and Sandra. Unlike other ghosts who haunt houses these two are woven into the fabric of the house. They have become the house. They are in the walls, in the plumbing, everywhere. That’s an unusual idea and could have been really spooky, but it wasn’t because Rooms focuses too much on the story of each character. With the exception of little Amy, they are all troubled. The ex-wife is an alcoholic, Minna is a sex addict, Trenton is a suicidal teenager, Sandra, one of the ghosts, was shot, and Alice has secrets of her own.

The story moves along quickly, the descriptions are evocative, and the end is, although foreseeable, not bad. The biggest problem is that there are too many characters and, especially the ghosts Alice and Sandra, are too alike. They have different names and a different story but that’s not enough to tell them apart. The voices are too similar, even though they use another vocabulary. The same goes for the family members. They are all equally dysfunctional but if they were not so distinct through age and gender, they would blend into each other as well. Some of the descriptions of alcoholism or Minna’s and Trenton’s behaviour are spot on but they seem to exist in a vacuum. They have no history other than that the father was a bastard. We don’t understand Caroline’s drinking. We have no clue why Minna’s this bad, popping pills, jumping every guy that enters the house. Trenton’s the only character we get to understand a bit better.

Although I wasn’t too keen on this book, I think some readers might like it. Lauren Oliver knows how to write a scene or a description. However, overall this felt like a highly artificial attempt at a ghost story. The worst was maybe the lack of atmosphere. We don’t always need to know why a ghost is haunting a place but we want to feel the haunting. Atmosphere is a key element. As the story of a dysfunctional family it doesn’t work either because it lacks depth; for a character to be interesting he/she needs a bit more than being dysfunctional.

Maybe she’s better at writing for YA. Since I’ve got te first in the Delirium trilogy and Before I Fall I’ll certainly find out sooner or later.

Have you read any good ghost or haunted house stories lately?