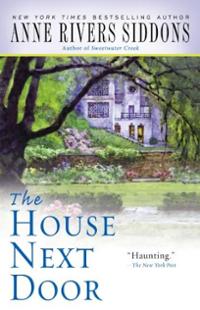 This summer I was suddenly in the mood to read ghost stories and haunted house stories. Looking for books to read I came across Anne Rivers Siddons The House Next Door, which is mentioned in Stephen King’s Danse Macabre as one of the best of its kind. I saw it mentioned again, some time later, in American Nightmares: The Haunted House Formula in American Popular Fiction by Dale Bailey. I’m a huge fan of the so-called Southern Gothic, which was another reason why I wanted to read The House Next Door as it clearly falls under that sub genre.

I had some preconceived ideas of what a haunted house story had to look like and I must say none of those match The House Next Door. It’s a really unusual take on the theme and maybe because of that particularly successful.

Nobody would suspect horrific events in suburban Atlanta, in a world of affluence, in which people lazily discuss their equally rich neighbours over a cocktail, but, if we believe Colquitt, the narrator of The House Next Door, horror has come to haunt the quiet, elegant neighbourhood, in which she and her husband live. Right at the beginning she tells us that the house next door is haunted and then describes why she thinks so in eloquent and elaborate details.

Colquitt and her husband are not the richest in this leafy suburban neighbourhood but they own a house next to a big piece of land, which has proven to be too difficult to build on as a small stream runs right through it. Colquitt cherishes this woodsy piece of land and spends a lot of time looking out of the window into the trees. One day, to her utter shock, her friend and neighbour announces that the land has been bought by a very young couple and that soon the beautiful land will turn into a construction site.

Colquitt dreads the destruction, the noise and dirt, and she also dreads the loss of privacy. While she isn’t a big fan of the young couple, she becomes friends with the young architect and falls in love with the plans of the house, and eagerly watches how it takes form and rises out of the ground. The house is spectacular. It looks as if it was growing out of the earth; it’s a dream made of glass and walls and strikingly beautiful.

While the construction progresses, strange things start to happen. Dead animals are found, people have accidents. I can’t say more or the book will be spoilt.

The Haunted House is unique because it really captures what domestic horror is all about: the place where we feel safest, our home, can turn into the unsafest place imaginable. The book is also unique because it’s not set in a remote wild landscape but in an elegant Southern suburb. The evil breaks into the lives of affluent, sheltered people, and turns their world upside down.

I have never read anything by Anne River Siddons before and while I had some problems with the characters, I really admire her descriptive skills. She elaborates the scenes so well, you think you’re watching a movie. I loved the descriptions of the house and how evil started to spread slowly. I didn’t like the characters, I found them annoying. I’m not the type who wants to gossip over a cocktail every evening, which they happily did. There’s a lot of drinking going on between these pages; not one social encounter takes place without abundant intake of alcohol. Still, I could feel with Colquitt. The shock over the loss of that beautiful untouched piece of land was something I could relate to. I also identified with her enthusiasm once she knew the project for the house. I love all sorts of houses and while this would be a bit too modern for me (I’m not so keen on too much glass), I can see how a house like this would work surrounded by so many trees. I would be like a big tree house.

The House Next Door is a unusual, atmospherical and well written example of a haunted house story with strong images that will stay with you long after you’ve finished the book. I liked that for once the house in question was not an old decrepit mansion, but a brand new stylish house designed by an artistic architect.

This is my first contribution to Carl’s RIP VIII Challenge. Don’t miss visiting the review site.