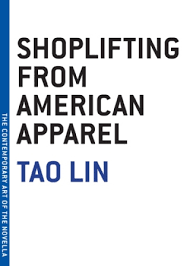 Sometimes I forget  something very important that I want from literature. I read books, I like them but at the end of the day, they are often far from our lives and certainly nothing new. And then I come upon a book like Shoplifting From American Apparel and all of a sudden I know what I was looking for. Books that look at contemporary life in a revealing way and are written in a very distinct voice.

Tao Lin was first only well-known in underground circles but starts to get more and more appreciation from everywhere. He is also known as the writer of a blog called Reader of Depressing Books. The title has changed meanwhile but the blog still exists as you can see here: Tao Lin’s Blog.

The book tells about two years in the life of a young writer. It’s mostly set in Manhattan but some of the chapters take place in other cities.

If it was only a writer’s story it wouldn’t be that special but it’s also an exploration of relationships, alternative lifestyles and the meaning of happiness. The characters question what our society takes as a given. Forms of living, culture and social conventions are explored and this with a total absence of sarcasm or cynicism which is refreshing.

Sam is a young writer. To make a living he works in a vegan restaurant but he has hardly enough money to buy things he likes. Shoplifting has become a habit for him. Getting caught seems to be part of it. Everything in  his life seems to be changing constantly. He goes through phases. At the beginning of the book he sees a girl called Sheila and his best friend is Luis, who is a writer as well. Their friendship takes place in cyberspace, on Gmail chat. They both blog as well. They met once but did not have all that much to say to each other although they can chat for hours.

“Do you think in five years the national media will create a stupid term like blogniks to describe us?”

A year later he is seeing Hester but they drift apart very soon. His best friend is Robert, with whom he goes to parties.

This book is rooted so deeply in contemporary life that it’s almost eerie. Sam meets the DJ Moby, he drinks smoothies, eats organic and vegan food, chats online and writes a blog. He sees friends and wonders if they are happier than he is. Some of his relationships take place in real life others are limited to cyberspace.

The dialogue is one of the best elements in the novel. It sounds very authentic with its frequent use of “like” and “or something”.

“I played video games,” said Luis. “Perfect Dark. I killed people for two hours then I got bored. I know what you mean by impossible.”

“This is fucked,” said Sam.

“You know those people that get up every day and do things,” said Luis.

“I’m going to eat cereal even though I’m not hungry, “said Sam.

“And are real proactive, ” said Luis. And like are getting things done, and never quit their jobs. Those people suck.”

“I know but that brings in no money, ” said Luis. “Are we, like, that word ‘bohemians’. Or something. Our bios: ‘They lived in poverty writing their masterpieces.'”

But more than dialogue, many of these exchanges are intimate conversations in which people listen to each other and take each other seriously.

I liked this book so much because it’s fresh, irreverent and looking at other ways to live, far from the mainstream but the characters are not self-destructive nor cynical or sarcastic, like they are in so many other books about young writers. Apart from the shoplifting, Sam is quite tame. And the shoplifting is not so much delinquency as silliness. The characters are insecure and floating but very close to their feelings. They can talk about their emotions and dreams and wishes. And even when a relationship has come to an end and they have nothing much to say anymore, they can put this into words. This doesn’t mean they are happy all the time, on the very contrary, they feel often sad and lonely but they express it, they don’t just act it out.

I also liked that there are references to so-called high culture standing next to the references to pop culture. Sam tests what works for him, in music or literature but doesn’t feel tied down by something being called “classic”. I read somewhere that Tao Lin also uses his books as a means to raise awareness for alternative lifestyles. It’s interesting to see how many times food is mentioned and what type of food. The way he writes about it makes it sound playful, not preachy at all. This made me think that there was once a time when writers felt they had a responsibility, that they should contribute to making this world a better place. I think Tao Lin can bee seen in that tradition.

I want to read more of Tao Lin and am very curious where he will go from here as a writer.

Have you read him?